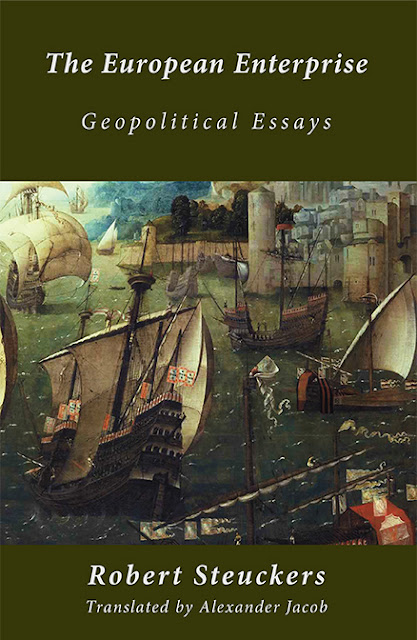 by Robert Steuckers (Author), Alexander Jacob (Translator)
Be the first to review this item
See all formats and editions Paperback
$24.95
To order:
https://www.amazon.com/European-Enterprise-Geopolitical-Essays/dp/0994595824
In an age of rampant globalisation the study of geopolitics assumes a crucial, and urgent, significance. While geopolitical considerations have always ruled imperial structures in the past, the present state of international politics, where America postures on the world-stage as sole hegemon, demands a renewed attention to the historical, economic, cultural and spiritual bases of the major empires of the European mainland. After the last great war, the main counterpoise to the ambitious American international enterprise has been the Soviet Union and its successor, the Russian Federation. Western Europe, however, has been hampered in its natural development as the matrix of "western civilisation" - which includes the Russian and the American - by the severe calamities it suffered in the two world-wars.

Steuckers' essays, which complement the Russian Eurasianist works, are therefore of particular importance in emphasising the western European role in a new world-order that will be directed not by the self-aggrandisement of capitalistic states but by the historical maturity requisite for genuine cultural development within and outside Europe.
Publié par robert steuckers à 08:49 Aucun commentaire:

Visions of Europe in the Napoleonic Era

Visions of Europe in the Napoleonic Era

Visions of Europe in the Napoleonic Era, excerpt from Chapter 2 of  The European Enterprise: Geopolitical Essays 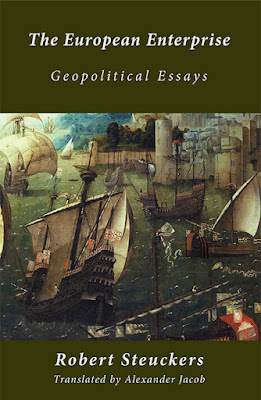 The philosophers of the Enlightenment already considered Europe to be stuck between Russia and America. They were divided into Russophiles and Russiphobes. All however considered America as a New Europe begun on the other side of the Atlantic and where multiple opportunities were waiting to be cultivated.

The Enlightenment and Herder

Within the framework of the Enlightenment and the ubiquitous Gallomania, Herder developed a critical vision of the intellectual situation in Europe and reflected deeply on the significance of the historical individuality of collective constructions, the fruits of long maturation defined and fashioned over time. He posited the bases of a positive critique of Gallomania as an artificial cult of imitated Greco-Roman styles to the exclusion of all others, particularly of the mediaeval Gothic. Rousseau agreed with this view and saw history as a harmonious dialectic between the nations and the world but esteemed that Europe in decline, behind the neoclassical façades of the 18th century, was morally condemnable because it was perverse and corrupt. Herder wished to re-establish more rooted popular cultures, revive autochthonous cultures which the processes of urbanisation and rationalisation typical of civilisation had marginalised or thwarted. For him Europe was a family of nations (of peoples). Contrarily to Rousseau, he esteemed that Europe is not condemnable in itself but that it should consolidate itself and not export to Russia and America an abstract Europeism with a Greco-Roman veneer, the expression of a rootless artificiality permitting all manner of manipulations and engendering despotism. Herder knew Europe physically and sensually having travelled from Riga to Nantes, peregrinations about which he has left us a diary teeming with observations relating to the attitudes of the 18th century. He compares in detail the regional cultures of the countries that he travelled through, poses a series of diagnostics combining assessments of decline with hopes of recovery – the recovery of a people through the resurrection of their language, their traditions and the roots of their literature. On the basis of this lived experience he wished to make of the Baltic countries, his homeland, and the Ukraine (along with the Crimea) the workshop of a renovated Europe which would be respectful of both the classical Greek models (but especially Homeric; Herder fully rehabilitates Homeric Greece providing an impetus to later philological researches) and faithful to its non-Greek and non- Roman, mediaeval and barbarian (Slavic and Germanic) ones.
This renovated Europe will be forged by the intervention of a new system of education much more attentive than its predecessors to the most ancient roots, of legal entities, of the law, the physical history of peoples, etc. In this sense, the Europe hoped for by Herder must be not a society of states constituted of persons but a “community of national personalities”.


After the troubles and upheavals of the French Revolution, after Napoleon’s accession to power, many European political observers began to view Europe as a “Continental Bloc” (Bertrand de Jouvenal published a work on this subject). With the continental blockade the idea of a European economic autarky progressively took shape. It has had especially French proponents but also many German partisans like Dalberg, Krause or the poet Jean Paul80 (whose direct descendant in the 20th century would be another poet Rudolf Pannwitz).
Publié par robert steuckers à 09:07 Aucun commentaire: